Exclusive: The Truth About the Alex Jones Phone Records

An emergency protective order motion has been filed in the Alex Jones case relating to claims in court that lawyers had inadvertently obtained years worth of Jones’ phone records, with emails showing Plaintiffs had not been given approval to use the material in court as it would violate attorney client privilege.

A video clip from the trial went viral yesterday showing Jones responding to the revelation by Mark Bankston that Jones’ lawyers had mistakenly sent Bankston what he described as “an entire digital copy of your entire cell phone, with every text message you’ve sent for the past two years.”

“That is how I know you lied to me when you said you did not have text messages about Sandy Hook,” Bankston claimed.

This was then seized upon by media outlets to suggest that some kind of Hunter Biden laptop moment had occurred, apparently miring Jones in an even deeper scandal.

However, according to an Emergency Motion for Enforcement of Protective Order filed by Jones’ lawyers, they had not given permission for the files, which only span a 6 month period from the end of 2019 through early 2020 and do not represent “an entire digital copy” of the cellphone, to be entered into evidence in court.

“The file transfer link, however, inadvertently gave Plaintiffs access to dozens of other folders as well, including confidential documents, such as the medical records of Sandy Hook Parents who are Plaintiffs in the Connecticut litigation and other documents subject to various privileges, including attorney-client and work product,” states the motion.

An email shows that the issue was raised by Bankston, who told Jones’ attorneys in an email that the files contained “confidential information.”

“My assumption is now that you did not intend to send us this? Let me know if I’m correct,” he enquired.

Bankston was told by Jones’ attorney F. Andino Reynal to “disregard the link.” 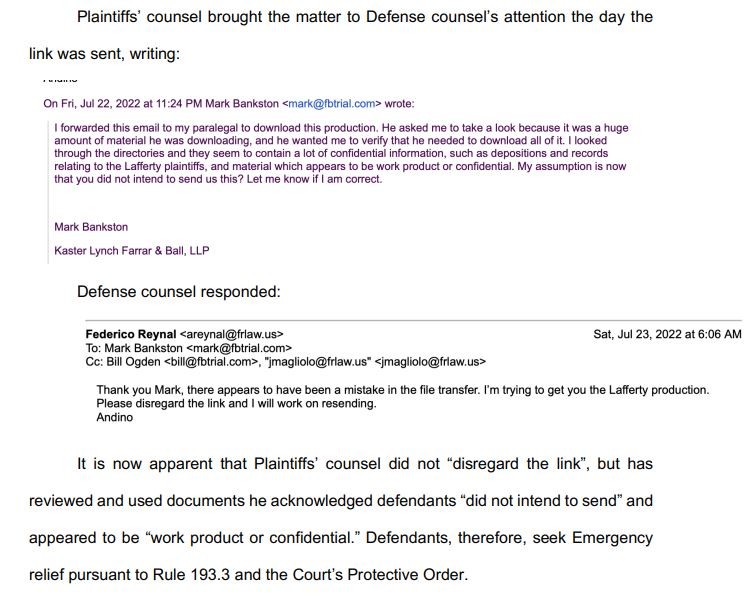 “It is now apparent that Plaintiffs’ counsel did not “disregard the link”, but has reviewed and used documents he acknowledged defendants “did not intend to send” and appeared to be “work product or confidential.” Defendants, therefore, seek Emergency relief pursuant to Rule 193.3 and the Court’s Protective Order,” states the motion.

The chunk of files were apparently sent to Bankston by a paralegal by mistake and were intended for lawyers in Connecticut representing other Sandy Hook families in separate cases, but were seized upon by Bankston and the media to suggest Jones had engaged in perjury or that he was hiding information.

Jones responded to the controversy by asserting that he turned all his phones over to his lawyers and was merely trying to comply with discovery.

Despite not being given permission to use the material in court, Bankston appears to have used it anyway as a PR stunt to sneak attack Jones, take him by surprise, and generate salacious media headlines.

Jones’ lawyers are now asserting that the files should have been deleted under Texas law and that their citation in court was a clear violation of attorney client privilege.

“On August 3, 2022, Counsel for Defendants learned, for the first time, that Bankston neither deleted nor disregarded the link sent in error. Rather, despite realizing just from “reading the directories” that they contained confidential, privileged and work product documents, he chose to violate various privileges, including the attorney-client privilege and work-product privilege, and invade third parties’ privacy by opening the individual files and reading them, subsequently knowingly using confidential information in the cross-examination of Defendant Jones,” states the motion, which can be read in full below.

In the age of mass Silicon Valley censorship It is crucial that we stay in touch.

I need you to sign up for my free newsletter here.

Support my sponsor – Turbo Force – a supercharged boost of clean energy without the comedown.

To learn more about the Great Reset - and to help fund our operation - please pre-order Alex Jones' book The Great Reset & The War for the World. You can also get an autographed copy!
Share
LIVE

In case you missed it...
Editors Choice